“Beth drove Grandma over the old, double-decker Lift Bridge as snowmobile traffic passed underneath on what was once a railroad track carrying ore off Copper Island.” ~ Snow Country

The old Finns called it Kuparisaari, Copper Island. It was an Ellis Island, of sorts, for Finnish immigrants.1

Between 1870 in the early 1920s, about 389,000 Finns emigrated to North America. The leading destination was Michigan, receiving over 20% of the immigrants.2

The reason for leaving Finland was fundamentally economic.3 Deplorable work conditions. Laws restricting internal migration. Inability to purchase land. The largest group of immigrants were sons of farmers, but not the firstborns who inherited the farms, but the second- and third-born sons who would otherwise be destined to sell their labor for one-year periods at a time for mere pittance.4

Copper Island was on the other end of the economic spectrum from Finland. Shaft houses dotted the landscape along the copper vein that forms the backbone of the Keweenaw Peninsula. There were plenty of jobs even for the low skilled workers as Houghton County, between 1860 and 1920 supplied 90% of the country’s copper.5

Wave after wave of immigrants settled on in the Copper Country near friends and family. In some settlements, Finns made up 20% of the population.6 Unlike many other groups, the Finns held onto their language and parts of their culture. Maybe it was comfort in numbers. Or their unique language. In any case, the Finns left their imprint on the cultural identity of the Keweenaw, even long after the last mine closed in 1968.

Like other one-industry communities, the region eventually declined, economically and in population. For example, Calumet Township dropped from a population of over 32,000 in 1910 to less than 7,000 today. 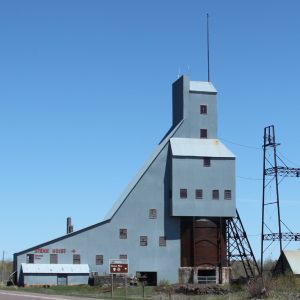 Once glimmering shaft houses are now rusted, empty shells or tourist attractions. Sandstone walls of roofless buildings enclose mini birch groves. A dredger from a reclamation plant is pulled up off the shores of Torch Lake, listing lifelessly to its side. And the Portage Lake lift Bridge, built in 1959, carries snowmobile traffic on its lower deck that has been stripped of its railroad tracks.

These remnants are proud reminders of the past. And in spite of economic hardship, the people of the Copper Country are gratified to live in such a beautiful place. Averaging 200 inches of snow annually, it’s not for lighthearted. Nonetheless, there are advantages to living in the Keweenaw. It’s a good place to raise kids. Neighbors help neighbors. And the summers are idyllic, albeit short.

Explore Copper Island through the pages of Snow Country. The fictional towns of Douglass and Quincy mirror the real towns of Houghton and Hancock, and although the names of businesses and persons are fictional, the history, landmarks, and spirit of the region described in the novel are real. I hope to introduce you to this beautiful setting and its quirky, rugged residents.

The Gap
More Truth in Fiction